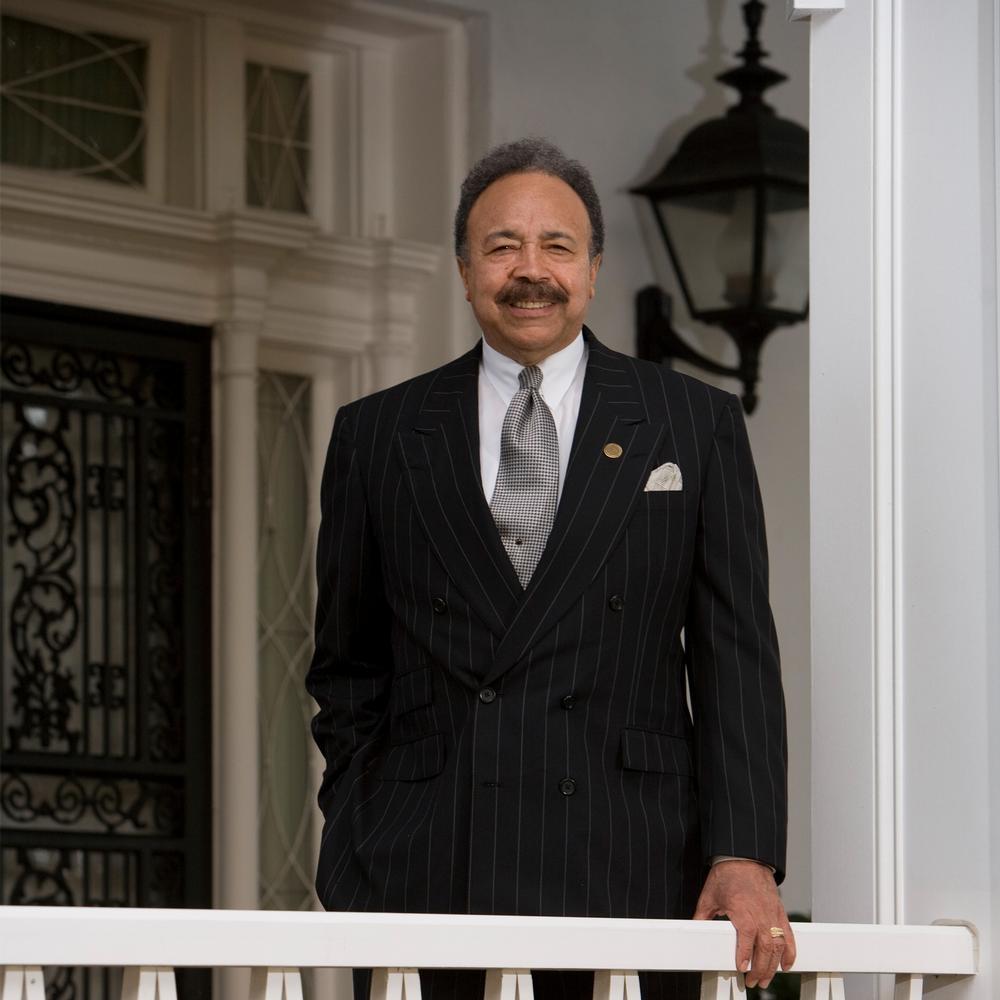 Dr. William R. Harvey arrived on the campus of Hampton Institute, in 1978, to take over the reigns as leader of an institution that was slowly losing ground.  Many wondered why he chose Hampton.  Other institutions, including majority institutions and more financially stable institutions, had offered him presidencies, but he decided to accept the position at Hampton.  He chose Hampton because he wanted to be in a place where he could offer the greatest service and make a difference.  Dr. Harvey has often stated that choosing Hampton was the best professional decision of his life!

Prior to beginning his illustrious career at Hampton, this celebrated statesman from Brewton, Alabama earned degrees from Talladega College, Virginia State University and Harvard University.  During his career at Hampton, he has received 11 honorary doctorates and countless awards, including the Daily Press Citizen of the Year Award, numerous keys to the city from localities around the country, American Council on Education John Hope Franklin Award, the City of Hampton Distinguished Citizen’s Medal, and the Chief Executive Officer of the Year Leadership Award.  His alma mater, Talladega College, named the African American Art Museum that houses the treasured Amistad Murals in his honor.  Now, following a steady, four-decade plus climb of greatness, Dr. Harvey will move on to his next chapter of service on June 30, 2022.

It is virtually impossible to express in words the debt of gratitude the entire Hampton University community carries ever so deeply for Dr. Harvey. The news of his retirement is likely to draw a full range of emotions because he has touched the lives of so many.  His legacy is rich and indelible on nearly every inch and across every page in the annals of the historic campus.

“As a Hampton University Alumnus and Chairman of its Board of Trustees, the growth and development that I have witnessed under Dr. Harvey’s successful leadership have been, in a word, triumphant,” said Trustee Wesley Coleman.  “The significance of this president’s legendary contributions to Hampton will be celebrated for generations. Indeed, the school is so much better off for his having served as our 12th President. Therefore, on behalf of the Board of Trustees and all of us who love Hampton, we will always be grateful to Dr. and Mrs. Harvey for the immeasurably great job that they have done for the past 43 years and will continue to do for the remainder of his tenure.”

Many will remember the day Dr. Harvey arrived on the campus with a great vision of what Hampton could become.  He based his vision on the words of Hampton’s founder, General Samuel Chapman Armstrong, who said that he wanted Hampton to have excellent academics (which today is called workforce development) and to build character.  Armstrong also said that of the two, character was more important.  This is the playbook that Dr. Harvey followed throughout his entire tenure.  It is from this playbook Dr. Harvey charted his unprecedented success as a president and Hampton’s tremendous growth as an institution.

Hampton University and the higher education community are proud of the legacy of leadership that Dr. Harvey has established during his 43-year tenure at our “Home by the Sea.”  The triumphs under Dr. Harvey’s leadership are more than worthy of note and actually too many to list.  A sampling of his accomplishments include:  the initiation of 92 new academic degrees, including 12 new doctoral programs; erecting 29 new buildings; increasing SAT scores by more than 300 points; launching four satellites which are currently flying in space; building a state-of the-art weather antenna that can detect hurricanes and storms up to 2,000 miles away; establishing the largest free-standing proton beam cancer center in the world, which treats prostate, breast, lung, ocular, pediatric, spine, head, neck and brain cancers; and increasing the endowment from $29 million to over $300 million.

Hampton is not the same place it was when Dr. Harvey arrived.  Today, Hampton attracts outstanding students with high SAT scores who bring positive national and international attention to Hampton by winning prestigious scholarships and competitions, conducting research, as well as engaging in prominent leadership and service activities.  Interest in the “Hampton Experience” has led to between 15,000 and 20,000 applications annually and a steady enrollment.   More than 36,000 students have graduated from Hampton under his leadership. Classified by the Carnegie Commission as a ‘High Research Activity’ institution, faculty and students conduct cutting-edge research in various areas. Hampton continuously ranks high among the nation’s colleges and universities.  Dr. Harvey’s list of accomplishments is much too long to include each one, but they have benefited Hampton, the Hampton Roads Region, the Commonwealth of Virginia, and the national higher education landscape.

As 100% owner of a PepsiCo Bottling Company in Houghton, Michigan, Dr. Harvey is an astute businessman who runs Hampton as a business for educational purposes.  When asked for the formula for his success, Dr. Harvey shared, “The formula for any success that I have had is based on five priorities: character traits of honesty, integrity, respect, trustworthiness and good personal behavior; high standards and values; a good work ethic; service to others; and appreciating and utilizing the team approach.”

In addition to the professional accomplishments Dr. Harvey achieved at Hampton, he also experienced great personal joy on these hallowed grounds.  Dr. Harvey moved to Hampton with his wife Norma Baker Harvey, to whom he has now been married to for 53 years.  Mrs. Harvey is legendary in her own right.  Not only has she handled her duties as First Lady with style and grace, she has been of great service to the wider community, as well.  She is known for her active service as a board member of the American Heart Association, the Virginia Symphony, Towne Bank, Board of Visitors of the College of William and Mary, the National Conference of Community and Justice, the Peninsula Fine Arts Center, and the Planning and Research Committee for the United Way.  Recognized for her commitment to service, Mrs. Harvey was appointed to serve on the Governor’s Task Force on Substance Abuse and Sexual Assault on College Campuses and the USS Hampton Commissioning Committee.  She has made significant contributions in each of these roles.

Dr. and Mrs. Harvey arrived at Hampton with their two young children, Kelly Renee and William Christopher.  Their youngest daughter Leslie Denise was born here after they arrived.  Leslie is the first baby born to a sitting president since Gen. Armstrong and his wife had baby Margaret in 1893. The Harveys raised their family here, and it has expanded to include four grand-daughters—Taylor, Gabrielle, Lauren and Victoria.  They have also adopted the Hampton family as their own.  Hampton is not just a job for Dr. Harvey; it is a way of life.

The author of books, articles, and other publications, Dr. Harvey is often in demand to lecture on leadership and fundraising at major colleges, universities, and organizations.  He plans to continue to be of service to the higher education and business communities, as well as complete several book projects now underway.  Everyone who knows Dr. Harvey knows that he will always contribute to and be of service to his “Home by the Sea.”