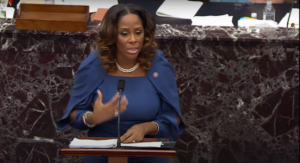 U.S. Del. Stacey Plaskett is among a growing list of Democrats pushing back on qualified immunity laws that protect law enforcement officials.

The resurgence of the Black Lives Matter movement last summer and pledges by more than 100 companies to fight racism and police brutality and advance racial equity seem like lip service today. Police across the country are still killing Black men and women.

Plaskett, one of many Democrats fighting qualified immunity for police, described the protection as a “hood” for bad cops who she described as a modern-day Ku Klux Klan intimidating and killing Black Americans.

“Qualified immunity has in many instances become the hood for bad police officers to, in fact, act as modern-day Ku Klux Klan members against Black and Brown people in this country. And it has got to stop,” Plaskett told CNN on Saturday.

Democrats and Republicans are trying to reach a compromise on a police reform bill. Democrats in the House of Representatives have passed the George Floyd Justice In Policing Act. The bill would limit qualified immunity to a defense in a private civil suit against a law enforcement or corrections officer.

The bill is a longshot as at least ten Republicans would have to support it, which is unlikely.