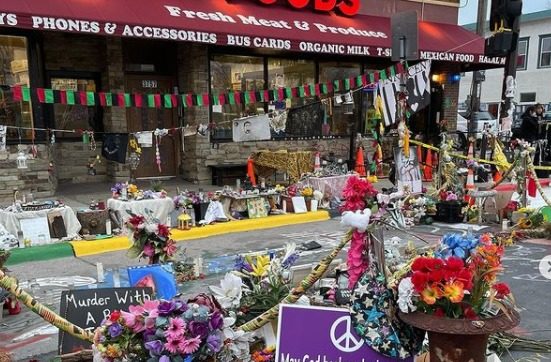 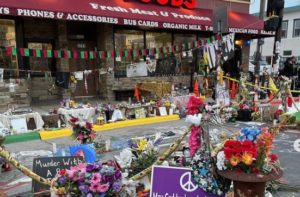 The area where George Floyd lost his life on May 25, 2020, has become a combination of a healing ground, memorial, protest location, and reminder of needed police reform. Despite the presence of fresh flowers and vibrant memorial art, barricades mark boundaries. Trash must be cleaned. People gather at the place making headlines. Some of them come from near and far. Business owners also want others to remember the economic justice element of their plight. They once owned thriving businesses. Now, they do not.

The memorial area is located at the intersection of East 38th Street and Chicago Avenue in Minneapolis, tucked inside of a neighborhood where people also must live and make a living. People are still coming to the area, now known as George Floyd Square, mainly to pay homage to Floyd. The Star Tribune reported that hundreds of people trickled into the square to hear and celebrate the Chauvin verdict, earlier this week.

“It has remained blocked off by concrete barricades, bike racks, and anti-tank defense structures maintained by a controversial group of activists demanding the city of Minneapolis meet 24 demands in return for yielding back the street,” The Star Tribune reported.

However, Black-owned businesses were established there before Floyd was killed by former police officer Derek Chauvin. And now, they are struggling.

According to the New York Post’s report, at least five stores along one block are now shuttered. Following the killing of Floyd, carjackings have nearly tripled. Cars are being stolen at high rates. Police presence has also been reduced. Black merchants said that police have abandoned the blocked-off intersection, while ‘creating a dangerous autonomous zone that has seen crime spike and business evaporate.’

“On Thursday the intersection was essentially abandoned—save for the occasional gawker who posed for photos in front of a mural outside Cup Foods, the convenience store where Floyd allegedly passed a counterfeit $20 bill,” the New York Post also reported.

Black business owners in the location also refer to themselves as the 38th Street Black Business Collective. A GoFundMe campaign reminds that 38th and Chicago had been home to some of Minnesota’s most burgeoning Black businesses before the area was recently named George Floyd Square. The current fundraising goal to give the business owners a hand is $400,000.

“The Black businesses along George Floyd Square have suffered greatly. Lack of traffic down this once busy street has led to an unintended economic downfall for these businesses. As the community continues to hold space, it is imperative that decision makers consider the economic toll that has been paid. These once prospering Black businesses have seen great revenue loss, over 75% loss to date. To date, there has been no financial reprieve from the city of Minneapolis or the local business association. These businesses feel they have been the sacrificial lamb of the movement and while everyone agrees that justice for George Floyd is the ultimate goal, it should not come at the cost of losing one’s livelihood especially for these Black families,” a GoFundMe post said.

The 38th Street Black Business Collective mentioned that Smoke In The Pit, Inc., Dragon Wok, Just Turkey, and Urban Touch Boutique are among businesses that were local favorites. They are in need of financial support.